Verity Joyce to swim '40 for 40' to raise awareness of Op COURAGE, the Veterans Mental Health and Wellbeing Service

Staff at Leeds and York Partnership NHS Foundation Trust are backing their teammate, outdoor swimming champion Verity Joyce, in a 40-mile outdoor swim in her bid to raise awareness for NHS Op COURAGE, the Veterans Mental Health and Wellbeing Service. Verity’s latest swimming challenge has been timed to coincide with the 40th anniversary of the Falklands War and will take place this summer.

The new challenge comes after Verity’s incredible achievement, in August of last year, of becoming the first deaf British female swimmer to cross the Channel for which she received a Special Recognition Award from the Channel Swimming and Piloting Federation. Verity raised over £7000 for her chosen charity Hearing Dogs for Deaf People, and since then it’s been a whirl of media interviews and starting a new job with the Yorkshire mental health and learning disabilities trust.

You can watch a short film of Verity talking about her swim story, her role and veterans mental health awareness:

Verity, who lives in Catterick, is a Practice Development Practitioner with the Veterans High Intensity Mental Health Service for the North of England. The service forms part of the nationwide NHS Op COURAGE service which provides mental health and wellbeing support for veterans.

Verity has been deaf from birth, and has always been a keen swimmer, representing Great Britain in her teens at the World Deaf Games. She has also overcome Ménière’s Disease, a vestibular disorder of the inner ear that causes recurring episodes of vertigo and tinnitus.

Verity comments: “In 1997 I was told I would have to learn to walk again and would likely never swim again, after having a bilateral chemical labyrinthectomy (my inner ear balance system was destroyed with a toxic level of medicines). I was already deaf since a baby and swam for Great Britain in the Senior Deaf Team from the age of 12 years old. At 16 I was ranked World Number 3 in my best event, but I was becoming too ill with Ménière’s Disease that made me dizzy, therefore I had to accept this last resort treatment at 17 years old. It forced me to end my swimming career early and it took me years to overcome the loss. I was left with triple sensory impairment; not only was I deaf, but also my balance and vision were now affected too.

“Fast forward 24 years, I have found a way to rehabilitate my brain and use neuroplasticity. I found that swimming outdoors was easier, by removing all the confusing visual input that swimming pools give. Vestibular migraines have meant I have to manage sensory overload.

“I thought that, just maybe, a childhood dream of swimming the English Channel could be possible. I tried a relay, and my balance coped.

“I booked a solo 3 years ago, before there was any glimpse of a global pandemic on the horizon. The pandemic and a very cold winter in 2020 affected training a lot: but just like rehabilitation with long term conditions and disability, I have to aim to train smart, rather than hard. 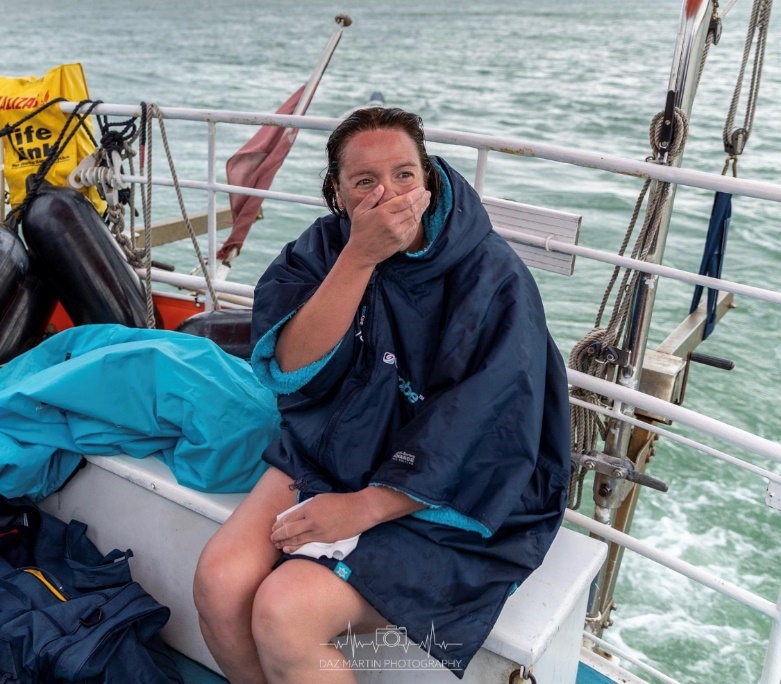 “Rather like crossing the channel, recovery isn’t in a straight line, many times you can feel like you are going way off course, far from your intended destination and goal. The important part is to keep going day by day, step by step, stroke by stroke.”

Verity, who is proud to be from a military family herself, holds a Masters in Research and is a trained physiotherapist and counsellor. She joined the NHS trust in January and her work as a Practice Development Practitioner is involving her in both service development and clinician development for the Veterans Mental Health and Wellbeing Service. She adds: “In Op COURAGE we are aware that the impact of military service can contribute to 3.5 times greater hearing loss. Hearing loss does not directly correlate with poor mental health by itself, but if this is not managed well there is the potential to impact mental health and I want to do what I can to raise awareness about that and how veterans can access help and support.”

In March this year, Verity was interviewed for ‘The Ladder’ on Times Radio a series in which presenter Cathy Newman speaks to women who have made it to the very top of their profession.

Verity comments: “Ironically, being deaf, I do not listen to the radio; we did the interview via zoom! I talked about how things might not work out how you want them to be, but it does not mean you have failed. It has taken me time to be ok with that myself and step back from situations when they happen. It can make you braver with taking risks, being vulnerable and stepping out into the unknown. You actually find the more courageous part of yourself in the process. Flexible mindsets, support networks, trying different management techniques from a growing toolbox are all key as you go through your life.”

More recently Verity has been busy filming an episode for ITV’s ‘This is Deaf’, which was launched during Deaf Awareness Week and ITV’s BSL Zone filmed her talking about what she would tell deaf children today.

“I do hope that I can give the message that we can still use our different abilities as strengths in creative ways both in the workplace and in our everyday lives.”

If you would like to donate to Verity’s Just Giving page, you can do so at https://justgiving.com/fundraising/40swim

If you or someone you know is struggling with their mental health, expert help is available from Op COURAGE: The Veterans Mental Health and Wellbeing Service.

It doesn’t matter if you’re due to leave the Armed Forces, just left the Armed Forces or left many years ago, the service is here to help and understand the courage it takes to speak to someone.

For more information, visit the NHS website at www.nhs.uk/opcourage

Sometimes the experiences people have during their military service or after their transition to civilian life can trigger problems with their mental health and wellbeing.  These can include anxiety, depression, a problem with controlling anger, alcohol and drug misuse, sleep problems, problems with adjustment and post-traumatic stress disorder.